I was violently sick, yet still they carried on.

I’m Janice. I live in the Northwest of England, and I’m in my 40s. This is my story.

I approached my doctor in 2006 to be sterilized. I was sent to my local hospital (Warrington), and told by a doctor there about a new product – so easy to fit! He said I was perfect to be a test subject, because I had a large family. I was in my 30s. However I fell pregnant, although the reminders kept coming from the surgeon ring up, get booked in, the usual. I had my fifth baby on the 21 November 2006.

I let things settle, then decided it was time to go to the hospital to be sterilized the normal way. Again I was met by the same doctor. Same story, however now he told me “lots of ladies have had it, the trial is over and everyone is loving it”. I was 36.

I went in for my Essure procedure. I was so shocked as the room was full of people, and the atmosphere was like buzzing, lots of people watching a huge screen in the room. The procedure started, and the right side was fitted, however on the left side the doctor struggled. 4 different packets he opened to try to get the coil in my tube, the spring would not release from the applicator the doctor was using.

He carried on. By this time I had been lay there for over an hour and the sickness started. I was violently sick, yet still they carried on. I was put on a ward for observation.

Early 2009 I went back for my check; I had just started a new job. I was not offered nor given the HSG test (this is recommended in Essure’s own product instructions), I was given a normal internal scan. Her face look shocked, she turned to me and said, “One spring is missing, we need to bring you in asap, to be done the normal way”.

I was so shocked, and upset as I had never had an operation at all before. I was booked in for the Friday 4 days later – to have “normal” sterilization. I awoke from my op and asked the surgeon “did you tie my tubes in bows?” He laughed and said yes, and that was that – I was sent home.

Years went by, strange things happened. In 2010 my toe nails died, just turned in and turned black, I had to have them removed. I remember that I visited my GP to ask if I was bipolar as I had strange thoughts, thoughts that worried me. I was told I was fine, that I just worked hard, and to carry on.

In 2011 all hell broke loose after a slight stumble. The pain in my back, hips, neck, and legs was horrific, I struggled to walk and needed a walking aid, it felt like a dragging pain in my left leg.

My bladder stopped working, I had no feeling when I needed a wee, so I visited incontinence nurses who delivered pads to my house. I had stem treatment on my bladder, its an electric current that you insert daily for 3 weeks, they left me 6 weeks and nothing.

I was then diagnosed with fibromyalgia. I was pale, tired, slept all the time. The thought was still in my head that I had no way out, only in a bottle of pills, and suicide did cross my mind. My children helped me to do simple tasks, I couldn’t even put on my own shoes.

I attended at this point a chiropractor, who was unable to help me due to the pain I was in. However he did pick up on my BP – it was so high that I was a risk of heart attack or stroke.

Things went from bad to worse. In early 2016 due to the pain in my hips, the GP sent me for an x-ray. A few days later a letter landed, telling me that I had osteoarthritis in both hips, and possible spine and neck, I was called in by my GP who said I was young to have this. I was 44.

I decided enough was enough and booked a sports therapy nurse to come to my home as I had to find a way to get my mobility on track. Life was so bad, I didn’t leave the house; I had anxiety attacks when I did, depression so bad I stared at the walls rather than speak to people. I couldn’t even drive a car as I was so scared that I was a liability on the road. I couldn’t play with my kids – I felt like I wasn’t a good wife or mum. I couldn’t work – I was in pain all the time. My self confidence was at rock bottom.

Then I stumbled on the Essure Problems page on Facebook and an alarm bell went off, but they removed mine back in 09 didn’t they? Wasn’t that why they had sterilized me a second time?

I called the hospital. They would not help, and the GP laughed in my face and said I was just old. I called and called looking for answers on what had shown on the x-ray I had on my hips.

I then wrote to PALS and made a formal complaint to the hospital. This was my health, my life, and I needed to know what was there in my uterus. I was called in to a meeting with the head of the gynaecology ward, who had in fact seen me with all my babies. She was very nice, but she couldn’t give me answers as the hospital no longer offered Essure (yet didn’t say why not!).

She did say that seeing as I’d had 5 children and lost 4 through miscarriage years and years previously, perhaps something was going on? I was heart broken – the miscarriages were 14/15 years prior, I was a full time working mum, and after the losses I had in fact gone on to have 3 healthy babies. So why would my current problems be related?

It was at that point I was shown the X-ray. I had 2 essure springs in my fallopian tubes – and 2 metal filshie clips on my tubes also. I was horrified at what I’d seen. So in theory I was sterilized twice. What had happened to the “missing” spring that had been the trigger for my second op in 2009?

I was sent to Liverpool Womens Hospital, to see Dr Botros. He didn‘t seem interested really in my symptoms, he didn’t care about them, but said he would take out my tubes – including the essure coils and filshie clips. I had by this time obtained my notes. Back in ’09 the doctor had in fact reported one essure spring missing, and the other embedded in my fundus – the roof of my womb.

However after a HSG at Liverpool I was told this was not the case, and that both essure springs were in place. I didn’t know who to believe.

My operation was nerve wracking. I thought to myself, “what if i am going to be like this forever? What if..?” but at this point I just needed the poison out of my body. I didn’t want anything more adding to my ever-growing symptoms list.

When I awoke the first thing I was told was that one tube was in fact welded to my uterus. However when I asked later on if it was the “missing” left one, I was fobbed off and treated as if I dreamed it.

I felt straight away that I needed the toilet. The sensation had returned almost immediately.

I arrived home. The colour came back to my face, the dark circles under my eyes disappeared. I felt fresher and clean; I had noticed for years a strange smell, especially around the time of the month, the worst smell I have ever smelt! It disappeared. 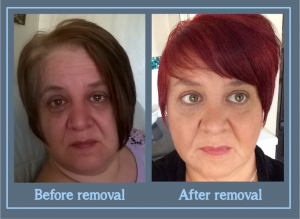 My mobility returned. The bloating subsided and my weight began to drop. I had gone up to 16 stone since essure was placed, a size 20/22. I was delighted. 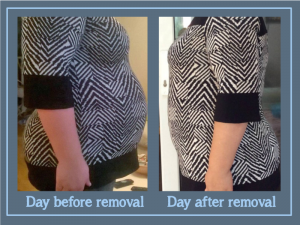 However after asking questions after my operation, I found that the removed Essure coils were not even sent to pathology as I’d asked, and when questioned I was told they had gone in the sharps bin. Apparently I had a cyst, yet there was no mention of the welded coil – or why I was in theatre for over 4 hours, when this operation normally takes half that.

Now a year E-free and I’m like a new person. I have a job, new friends, my kids have a mum, and hubby has his wife back. I am now a size 12/14 and weigh just over 11 and a half stone. It’s like I have a fresh new start to life, and I smile again! I smile every single day. I look in a mirror and don’t recognise my face, my glow has returned. I get no more swelling or rashes. My muscle pain is much reduced and I am able to exercise again – I like to cycle. I have taken no meds at all for a year, not even for blood pressure, and it has remained normal with no further treatment.

I can remember one day while sat in my garden alone, before I even knew Essure was still there, I honestly thought I was dying. I felt like everything was closing down, like my body was poison.

Please say no to Essure. Is it worth the risk? You owe it to yourself, children and partners to do your homework. If something sounds to good to be true, it usually is.